Alexander Fiske-Harrison is an author and journalist, conservationist and financier.

He was born in London in 1976, the youngest of three brothers. They grew up between London and rural East Anglia. 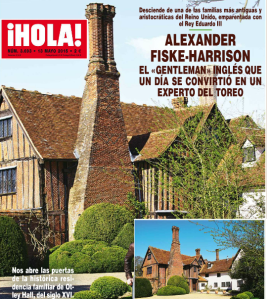 Translated from Spanish: “Descended from one of the most ancient and aristoratic families of the United Kingdom, forefathed by the Plantagenet Kings: ¡Hola! magazine opens the doors of the historic family residence, Otley Hall from the 16th Century etc., etc.

The Fiske family first arrived in the area as the Viking victors at the great Battle of Maldon in 991 A.D., less than 15 miles from where they live today in the village of Layer de la Haye

(The Fiskes & Harrisons have intermarried several times over the centuries, producing the likes of Major Fiske Goodeve Fiske-Harrison, the 18th century High Sherriff of Essex, the various Lords of the Manor of Copford, Studhaugh, Otley, etc. etc. The Gosnolds who founded the Jamestown Colony and after whom Martha’s Vineyard is named, the first Governors of the Massachusettes Bay Colony and Connecticut, the WWII fighter pilot hero, Olympic champion and King of the Cresta Run, Billy Fiske etc. etc.)

After graduating in history from the University of Cambridge in 1960, Clive Fiske Harrison moved to London to work as a stockbroker in the City at Panmure Gordon & Co. under Ian Cameron, the father of the future Conservative Prime Minister David Cameron, then Fiske & Co., which later publicly listed on the London Stock Exchange with Clive as chairman.

His eldest son Byron Fiske Harrison became a cavalry officer in the British Army and polo player, before working his father into finance, beginning at  Cazenove & Co., and latterly as a Director of Goldman Sachs. His middle son, Jules, who died in a skiing accident in Switzerland in 1988, was, according to The Times, “a famously skilled and fearless skier” and the Daily Telegraph, “a formidable athlete on the slopes.”

Alexander was educated at Eton and then at the Universities of Oxford and London, beginning in Biological Sciences after a lifelong fascination with animals, having joined the World Wildlife Fund (as it then was) in 1988, aged 11, and Greenpeace in 1992, aged 16. He has remained a member of the former for over three decades.

He studied under Dr Malcolm J. Coe of the Department of Zoology at Oxford University and and who ran ran their Animal Ecology Research Group in the Tsavo National Park in Kenya, specialising in elephant ecology, and author of Islands in the Bush: A Natural History of the Kora National Reserve, Kenya.

Two years later, Alexander went on to study Philosophy, Politics and Economics, specialising in the thought of David Hume and Immanuel Kant under Dr John D. Kenyon, who was tutored by Jonathan Bennett, author of Kant’s Analytic, and Kant’s Dialectic, who himself was under M. J. Scott-Taggart and so on and so forth in an unbroken line of teaching back to Kant himself.

At the London School of Economics and Political Science he studied as a postgraduate at the Department of Philosophy, Logic and Scientific Method, his thesis on the possibility of revising the laws of classical logic in the light of quantum theory in physics. He returned to foundations of biology and consciousness studies under Professor David Papineau at King’s College, London, before leaving academia. (He holds both Master of Science and Master of Arts degrees.)

Aside from student journalism, his first article was ‘Hume and Kant’ in The Times Literary Supplement in 1997, when he was 21, and that same year on his travels in North Africa for The Times. He has since written for those publications many times, as well as the Sunday Times, The Independent, Financial Times, Daily Telegraph, Daily Mail, The Sun, The Spectator, The American Spectator, Prospect, Frieze, Open Skies (Emirates in-flight) and GQ magazines. He has also written in Spanish for ABC and El Norte de Castilla.

He has been profiled in The Times, The New York Times, Condé Nast’s Tatler, ¡Hola! magazine in Spain and has been interviewed on the BBC, CNN, Al-Jazeera, and presented on the Discovery Channel for Bear Grylls.

His first long feature article was after serving as a judge on the Loebner Prize 2000, the largest international contest of Artificial Intelligence. He wrote the commentary essay on that and the philosophy of AI, Alan Turing and Ludwig Wittgenstein for The TLS. His conclusions were technical but wide-ranging,

“The truth of the matter is hard to come by. Sufficiently good simulations of humans will inevitably come, and when they do, we may end up with no choice but to concede to their consciousness. One of the problems of consciousness is that we “identified” people and certain animals as conscious long before we “knew” (in the linguistic sense) they were so. Now scientific enquiry begs us to name our conditions for identifying something as conscious, and the trouble is that we do not really have any…. Wittgenstein hit this nail on the head with the comment, “My attitude towards him was an attitude towards a soul. I am not of the opinion that he has a soul.” For if it was mere opinion, or a piece of ordinary knowledge, it could be disconfirmed, which our thoughts on the consciousness of others can not.” 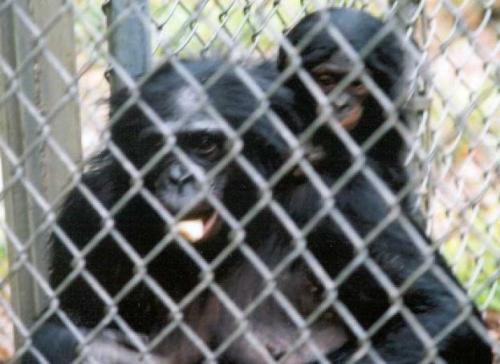 Continuing the theme of non-human intelligence he visited Georgia State University’s Language Research Centre in Atlanta to spend time with Professor Sue Savage-Rumbaugh, the bonobo Kanzi and the other great apes housed there. He wrote about his experience, the philosophy and the science of ape language research and its bearing on animal welfare in a cover-page essay for the FT ‘Weekend’, concluding that,

“It is only by fully grasping the intellectual capacities of the apes that we will be able to provide them with even rudimentary welfare standards.

[For] the great danger now is that great apes are kept alive merely to prevent the species going extinct, housed for generations in a prison-like environment that could produce mental deterioration leading to full mental disorder.”

As an undergraduate student, Alexander had been a winner of the Oxford New Writing Prize 1998 with his stage play The Death Of An Atheist, which was performed at the Wadham Theatre. He had also acted in Cuppers, the Oxford University Drama Society’s annual festival, in W. B. Yeat’s The Only Jealousy Of Emer, directed by his friend Hugh Dancy.

From 2004-2005 he attended one of New York’s most famous ‘Method’ acting schools, the Stella Adler Conservatory, when its greatest alumnus, Marlon Brando, was chairman. Alexander’s professional debut as an actor was in the Jacobean play The Maiden’s Tragedy at the Hackney Empire in London. His West End debut, as actor and playwright, was The Pendulum in 2008. The U.K.’s longest serving theatre critic, Michael Billington, writing in The Guardian, awarded it three our of four stars and said:

“Fiske-Harrison has clearly done his homework. The author himself plays the disintegrating hero with the right poker-backed irascibility;…it is refreshing to find a new play that gets away from bedsit angst… one comes away with the sensation of having seen an accomplished historical play.” 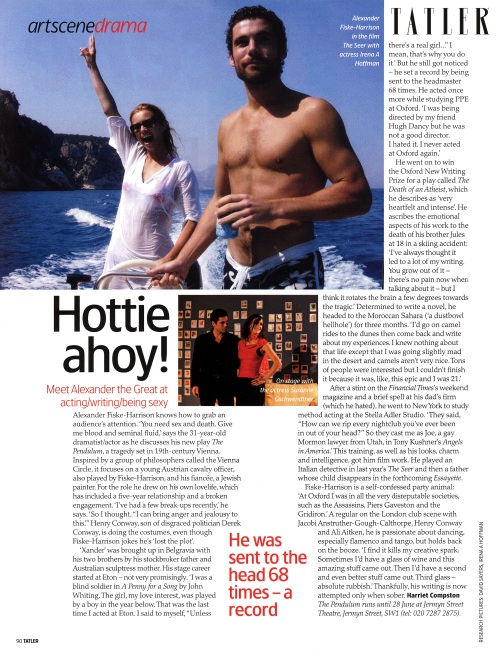 He acted in independent film and theatre in the US, Germany and Italy. He was consultant on the Academy Award Nominated Brando documentary, Listen To Me Marlon.

In 2008, Prospect magazine published an essay of Fiske-Harrison’s about Spanish bullfighting, drawing on his studies in animal behaviour, moral philosophy, drama and the half dozen bullfights he had witnessed over the years. Noting that fighting bulls also enter the food chain after death and live three times as long, on average, as meat cattle, and are reared wild, he concluded that,

Inspired to apply the immersive techniques he had first learned in acting to writing – he has been called a ‘Method writer’ both on radio (BBC) and in print (The Independent) – Alexander moved to Spain in late 2008 to investigate the subject further. He wrote up his research on his blog, ‘The Last Arena: In Search Of The Spanish Bullfight‘.

He turned this into a book, Into The Arena: The World Of The Spanish Bullfight, which was published in the UK on May 26th, 2011 by Profile Books. A critical and commercial success, The Times called him “the bullfighter-philosopher” and it was shortlisted for ‘The Bookie Prize’, the William Hill Sports Book Of The Year Award – “the world’s oldest and richest sports writing prize” – five months later.

His ethical conclusions on the topic were complex. The Daily Mail said that although Alexander “develops a taste for the whole gruesome spectacle, what makes the book work is that he never loses his disgust for it,” the Financial Times said, “it’s to Fiske-Harrison’s credit that he never quite gets over his moral qualms about bullfighting,” and the Literary Review concluded: “The question of whether a modern society should endorse animal suffering as entertainment is bound to cross the mind of any casual visitor to a bullfight. Alexander Fiske-Harrison first tussled with the issue in his early twenties and, as a student of both philosophy and biology, has perhaps tussled with it more lengthily and cogently than most of us.”

He has since lectured on the subject at the University of Seville, for the Foundation of Taurine Studies at the Royal Maestranza of Seville, at the University of Oxford, Eton College, the Edinburgh International Book Festival and alongside the Ambassador of Spain, to an audience including British Members of Parliament. He currently works with the non-profit organisation, the Fundación de Toro de Lidia, ‘Foundation of the Fighting Bull’.

He has run with the bulls in town across Spain for several years the editor and co-author of the 2018 guide to ‘running the bulls’, The Bulls Of Pamplona. The only official guide in the English language, it has a foreword by the Mayor of Pamplona and contributions from John Hemingway, Ernest Hemingway’s grandson, Beatrice Welles, Orson Welles’ daughter, and great American and Spanish bull-runners including Joe Distler, Dennis Clancey, Julen Madina, Miguel Ángel Eguiluz, Jokin Zuasti and Josechu Lopez and photos from senior European Pressphoto Agency photographer and 50-year Pamplona veteran Jim Hollander and award-winning Spanish photographer Nicolás Haro.

He is managing director of both Mephisto Productions Ltd. and International Polo Events Ltd. in London and a non-executive director of the publicly listed City stockbroking firm Fiske plc.

He is currently conducting preliminary research in Romania for a book on wolves and dogs and their interactions and common evolutionary heritage with humans, provisionally titled The Land Of Wolves. His blog on his progress is at www.thelandofwolves.com.